A Day In Kent Tour: with Canterbury & the White Cliffs (1-day)

Join us on this small-group Kent tour from London & spend a relaxing day exploring the highlights of the ‘Garden of England’. Travel through charming countryside, see spectacular coastline, visit the historic city of Canterbury & its famous Cathedral, and gaze out over the iconic White Cliffs of Dover…

How do I see available dates and book?

Click the green ‘Book Now!’ button (above right). Choose your date from the tour calendar and complete your information.

Where does the tour start & finish?

The tour starts and finishes at the Doubletree by Hilton Hotel, near Tower Hill station. The departure time is 8.30am, but please arrive at least 15 minutes before to check-in. At the end of the tour you’ll return to London by around 6.00pm.

Is there a booking discount?

Yes, direct bookings can get 10% off. When you’ve chosen your date, select the link Apply Promo or Voucher and enter the code ‘go21’.

What is included in the price?

All prices include minibus transportation and a friendly Driver-Guide who will provide fun and interesting commentary about Kent.

Bookings are flexible, and you can cancel up to 24 hours before departure, or change to an alternative date anytime.

How many people are there on a tour?

Small-groups are guaranteed. This tour travels with a maximum of 16 passengers.

What if I have a question but the answer isn’t here?

Take a look at our full FAQs page and you may find your answer there. If not, please get in touch at info@go-tours.co.uk. 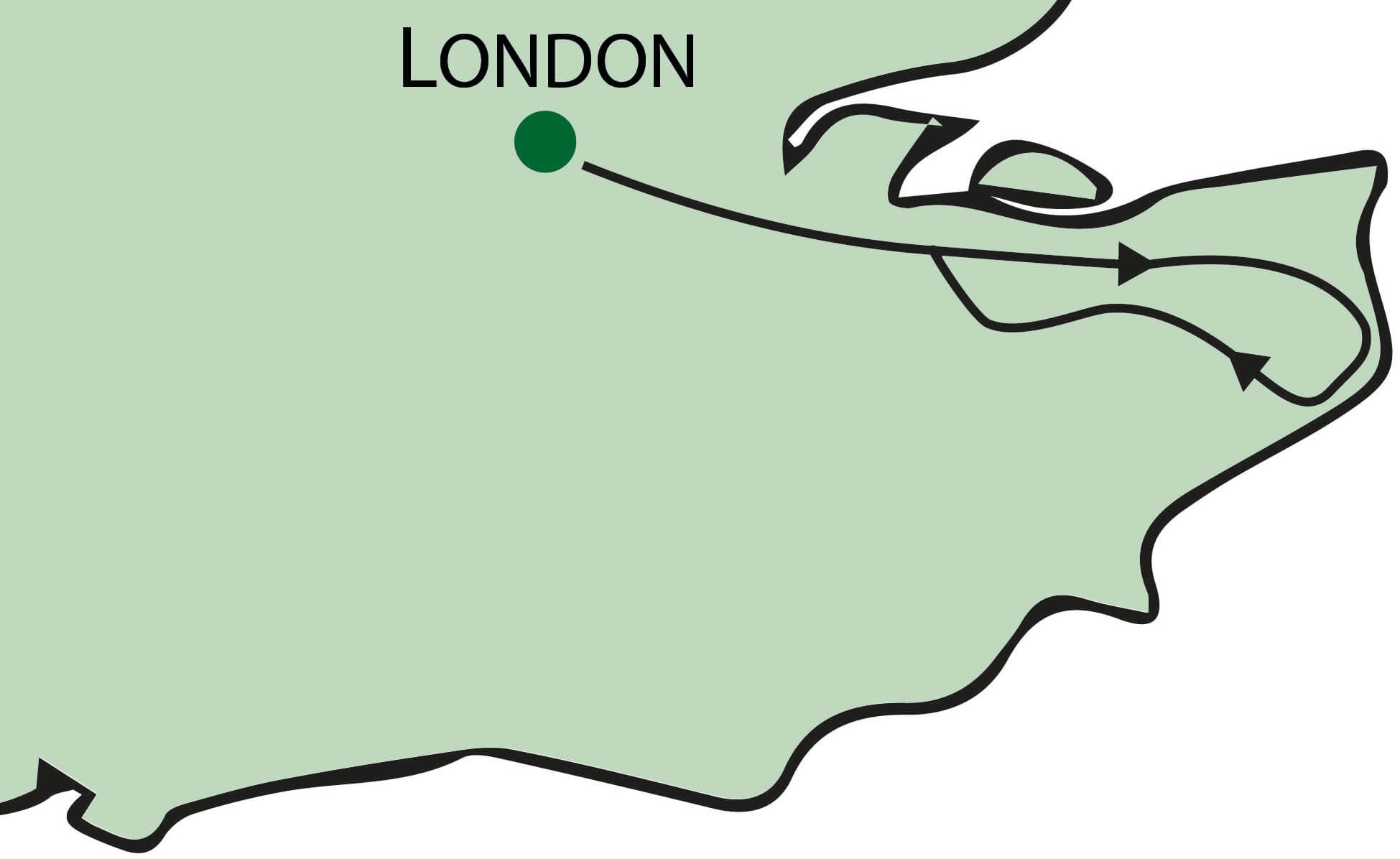 Join this friendly and relaxed small-group tour of Kent, and enjoy exploring an area famously known as the ‘Garden of England’. During the day we’ll absorb the highlights of Kent, including its charming countryside, the famous city of Canterbury and its dramatic coastline, including the iconic White Cliffs. This full-day tour travels at a relaxed pace and provides the time needed to explore these fantastic locations.

Join this friendly and relaxed small-group tour of Kent, and enjoy exploring an area famously known as the ‘Garden of England’. During the day we’ll absorb the highlights of Kent; its charming countryside, the famous city of Canterbury and the dramatic coastline, including the iconic White Cliffs. This full-day tour travels at a relaxed pace and provides the time needed to explore these fantastic locations.

The journey begins by travelling out of London, passing the Tower of London, Tower Bridge and the Canary Wharf financial district before we depart the city to the south-east. It won’t be long before we are travelling through the heart of the charming Kent countryside as we head towards the first stop of the day, Canterbury. This city is known especially for its Cathedral which is part of a world heritage site that has a history dating back to 597ad. The current Cathedral is seat of the Archbishop of Canterbury, and the most senior church in England. It was also a significant place of pilgrimage in the Middle Ages after then Archbishop Thomas Becket was killed by knights of King Henry II in 1170. Take time to visit the historic Cathedral and explore the heart of the city.

Next, the journey through Kent continues towards the coast, and the pretty seaside settlement of Deal. It was here that Britain’s Roman story began in 55bc, with their first invasion, led by Julius Caesar. At one point this was the busiest port in England, but today Deal is known for its charming high-street, cafe culture, sea-front views and Pier. Take time to explore and have lunch, perhaps some fresh fish & chips. After lunch we’ll travel further along the coast and we’ll see the historic Dover Castle, one of the most important fortresses in Britain and the centre of Operation Dynamo, which saw 330,000 soldiers evacuated from Dunkirk during the Second World War. Then we’ll arrive at our next stop; the famous White Cliffs, one of Britain’s most recognisable sights. The White Cliffs are a symbol of Kent, and Britain itself, with the white of the chalk giving the cliffs their distinctive colour. This is Britain’s closest point to continental Europe and on a clear day you’ll be able to see the coast of France. Take a walk along the clifftops and enjoy spectacular views.

This afternoon we’ll continue our voyage through the lovely Kent countryside; an area that has earned the nickname ‘the garden of England’. This charming hilly landscape is home to lots of gardens and fertile lands where you’ll see many lavender fields, orchards and vineyards. We’ll travel through the Kent Downs, and Area of Outstanding Natural Beauty (AONB) passing quaint villages as we make our way back towards London.

Our Kent Tour concludes at the DoubleTree by Hilton Hotel in Tower Hill, returning by approximately 5.30pm.